Ben’s flagship radio programme has been broadcast since 2008; it currently airs on stations across the UK, Ireland in Australia.

Sign up for Ben’s newsletter which will drop into your inbox on the 1st of each month. Full of updates and exciting news! 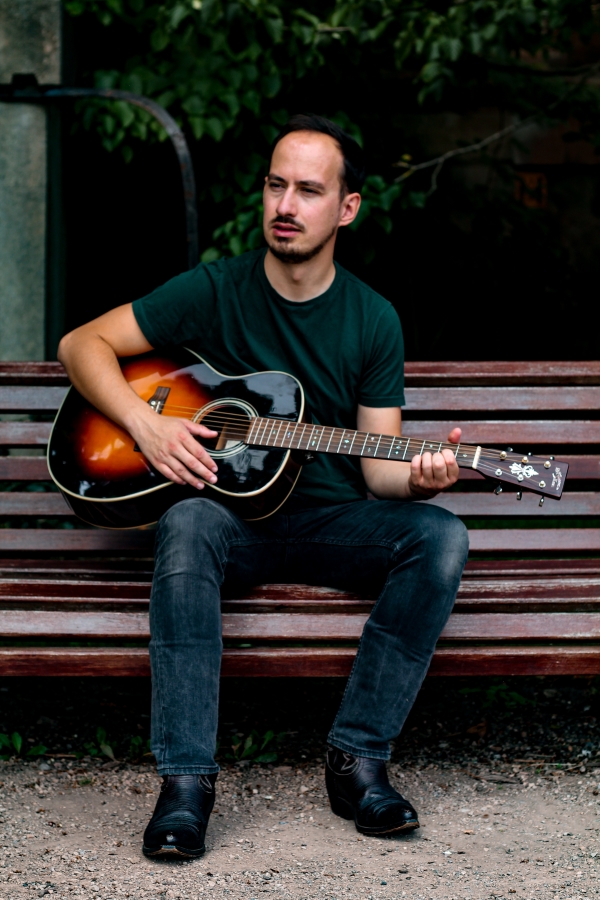 Welcome to the website of Ben R. Atkinson. Ben is a writer, musician, and broadcaster known for his radio programme, Ben’s Country Music Show, which airs on stations around the world. In addition, Ben has written two novels, released an album and EP of original music, and worked extensively in the media industry and Higher Education in the UK. Ben is currently studying for his PhD in music and American studies at the University of Lincoln, UK.

As a broadcaster, Ben is a familiar voice on independent radio across the UK and internationally, having hosted his syndicated radio programme, Ben’s Country Music Show, since 2008; the show now being broadcast on stations in the UK, Ireland, Australia, and the US. Ben learnt his craft at the Lincoln School of Film, Media and Journalism, graduating with a First Class degree in Media Production, a Masters Degree in Digital Media and the school’s award for Outstanding Contribution. He went on to train as part of the prestigious BBC Production Talent Pool at both MediaCity, Salford and the World Service, London.

Ben’s love of music emerged at an early age, and he was encouraged to pick up the guitar by his primary school music teacher. Since then, he has discovered that music runs in the family, with a piano teacher, two Opera House orchestra musicians, and an armed forces band member in his family tree. Ben has a passion for American roots music, including country, blues, and Americana, and he plays the guitar and mandolin. In 2020, during the height of the COVID-19 pandemic, the nationwide lockdown provided the opportunity for Ben to record his debut album, Cold Hard Shoulder, which consists of songs written over the past decade as well as new music composed specifically for the project. A live EP followed to mark Ben’s 30th birthday in 2021, and a second album is in the works with a release planned for 2023.

As a writer, Ben has written two novels which were both published independently. The Kraken’s Curse (2008) is a YA story of fantasy and intrigue set on the beautiful Devon coast while Walking on Cinders (2010) is a dystopian tale of a bitter global conflict and those who are fighting in the closing days of war in London and France. Walking on Cinders is notable as being one of the first novels by a British author to be promoted widely on social media, selling 1000 copies as part of the ‘1000 Books to Sell Project’ in 2010/11. Ben continues to work on a third novel.

In March 2020, Ben combined all his interests together to embark on a new challenge, a PhD study in Music. His thesis will examine the experiences of women in American country music during the period 1993-2023 and considers the impact of cultural change, new technology and campaign movements on the success and opportunities for women in the genre. The study is ethnographic, and to that end, Ben spent six weeks in the summer of 2022 living and working out in Nashville to support his research. In addition to his PhD, Ben is the Digital Networks Manager for the British Association for American Studies (BAAS) and lectures part-time on the BA Music programme in the Lincoln School of Creative Arts, University of Lincoln, UK.

Ben’s debut album, Cold Hard Shoulder, is available everywhere now! Made up of country/folk songs that Ben has written over the past ten years, plus some new tracks that were written during the last year. The album’s first single, I Never Liked Coffee Before You, premiered on digital platforms and on iTunes, Apple Music, and Amazon and the full album was released on Friday 28th August.

On 26th May 2020, the single received its radio debut on BBC Radio Lincolnshire as part of the BBC Uploads project which features creative work produced during social isolation. All proceeds from the album will be donated to local NHS charities in the UK as support for their work during the pandemic.

Find out more about the album here and order your copy on CD, vinyl or digitally right now on Band Camp. The album is also available to stream on all digital platforms.

On June 13th 2022, Ben performed at the historic Bluebird Cafe in Nashville, TN. The Monday open mic night provides a platform for songwriters and performers to share their music with a select room of music fans at the venue which has been renowned in Nashville for decades. Stars like Garth Brooks and Taylor Swift performed in their early careers, and on the night of June 13th Ben was number 13 in the running order, which just happens to be Taylor’s lucky number… as a big fan, that was pretty neat!

Each week we feature the latest music from the USA and UK, mixed in with country classics and live sessions. Ben brings you the latest News from Nashville, This Week in Country Music and both the Billboard country album and airplay charts.

The show began life on 103 The Eye, a community radio station serving Melton Mowbray and the Vale of Belvoir and the first in the UK to be awarded a five-year licence by the government. Since then, the show has gone on to be syndicated on stations around the world, including in Ireland, Australia and the US. Ben regularly features guest interviews, album reviews, the charts, news and history on his show.

You can find out more about Ben’s Country Music Show here.

I could not have anticipated how much of a fantastic utility Ben has been to my studies this year and couldn’t have asked for a better person to have been mentored by. He suggested things I could do to enhance my portfolio and I would really recommend him for any student.

Ben was utterly dedicated to his role as brand director. He did work far beyond his role dictated and showed incredible passion for the work he did. His website design skills and back-end technical knowledge proved invaluable. A true professional.

Ben is a strong all-rounder, from video and audio production, social media engagement, to creative writing and design. He is technically skilled using AV recording equipment, and editing software on both Mac and PC. Ben would make a superb addition to any team.

Ten years ago this week, I made a momentous journey. Little did I know at the time, but that trip would, in many ways, impact the journey my career would take over the coming decade and it would certainly shape and mould my personality into the person I am today.

This paper on the impact of COVID-19 in American country music, was presented at the Grieg Research School in Interdisciplinary Music Studies Summer School 2021, ‘Music in Crisis: Crisis in Music’, at the University of Bergen, Norway. You can view a video of the presentation at the end of this article.

Read more posts on the blog

Organisations which I'm proud to be associated with